I love this time of year - the garden looks so fresh and green. New shoots are coming up everywhere and on a day like today there is no better place to be than the garden - the sun is warm but not intense, the insect life - though vital - is not yet making its presence felt (yes, butterflies - okay, but who needs those pesky wasps and ants?) and the seeds you planted way back when are beginning to appear. Planning what to have in the garden is fun but not as much fun as seeing it all start to flourish. My garden is tiny but this year I was determined to plant more things to eat, so I've put in a gooseberry bush - much to the consternation of number one son ('mmm....very tart, gooseberries'), and also a blackcurrant bush - both of these remind me of my childhood - one summer when I was about 14 I went  blackcurrant picking and it took me all week to earn enough to buy myself some shoes! The gooseberry - well, that reminds me of my granddad's vegetable garden. He worked on a farm and had all manner of things in the enormous vegetable patch behind the house. I've also invested in some tomato plants, some onions, carrots, peas, lettuce, chillies, peppers and all manner of herbs.  Today I had lunch outside and sat for half an hour or so and admired my handiwork. This year is going to be a good year. 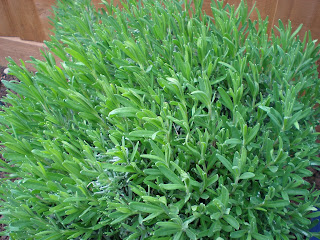 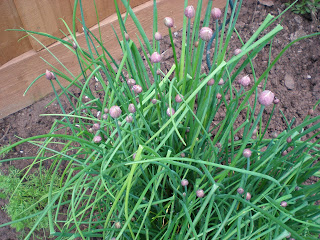 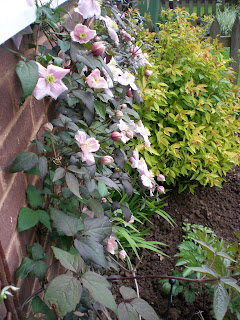 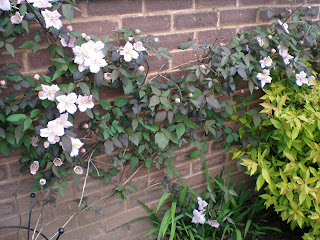 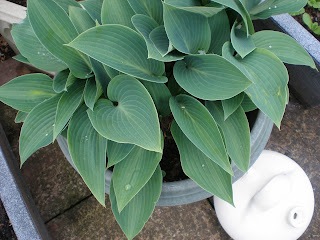 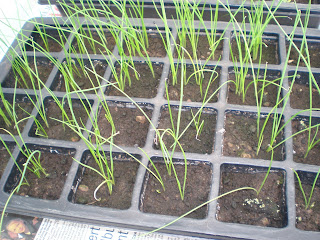 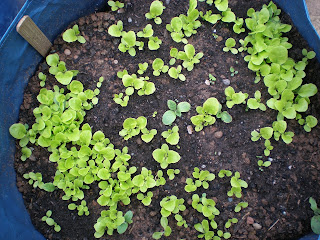 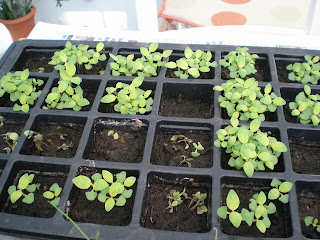 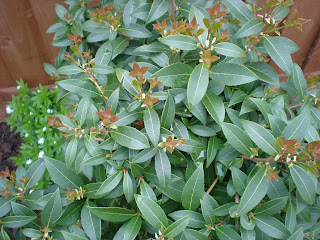 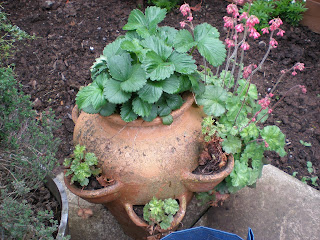 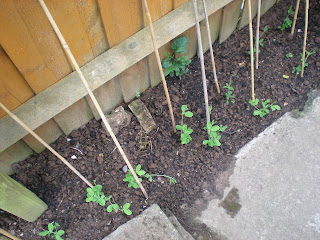 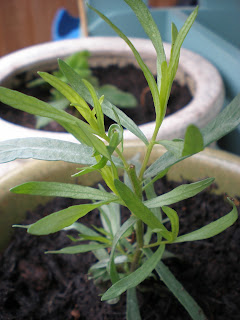 Posted by suefernandez at 1:12 PM No comments:

Ludlow is a beautiful town on the Shropshire/Herefordshire border with some lovely architecture including the old butter market building built in 1744 and known as the Butter Cross. The town also boasts many historical black and white timber framed buildings  and one of the finest examples of a medieval castle in England: the events organised at the castle will transport you back to medieval times -  castle tours, story telling, jousting, falconry displays and medieval games. The town has also become something of a gastronomic hub with many fine restaurants and two food festivals, one held in spring and another in autumn. Ludlow also has an arts festival in June - so plenty to keep you occupied, but my interest last week lay just outside the town at the racecourse for the last day of the jumping season. Ludlow Racecourse is, as you would expect for a small town - well, small! But it has everything - a beautiful old grandstand, private boxes with viewing balconies atop, a big screen so that you can follow every minute of the race, burger vans and hot drinks stalls, a members' marquee where the well-heeled were enjoying a three course dinner, bookies dotted about plying their trade, even some live music (well, I think they were alive!) but, most importantly, some beautiful racehorses and some brave jockeys for us to watch - even the Champion Jockey, Tony McCoy, was in action (yes, of course he won). It was a fine May evening (well, till it rained!) Anyway, here are some photos to remember it by. 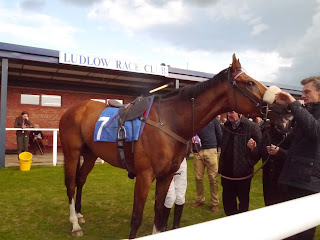 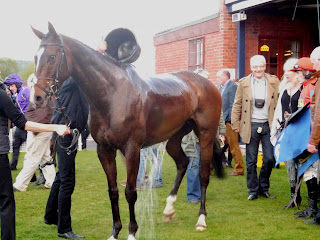 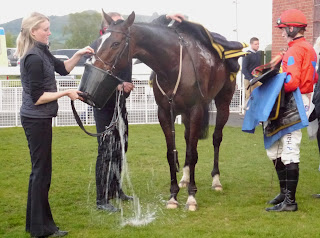 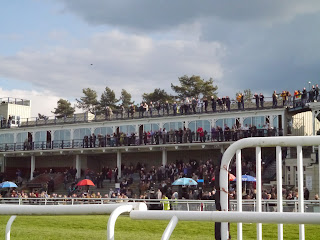 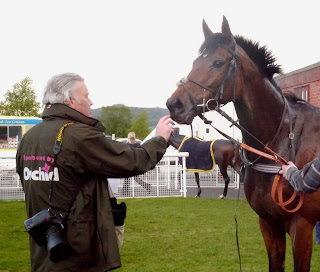 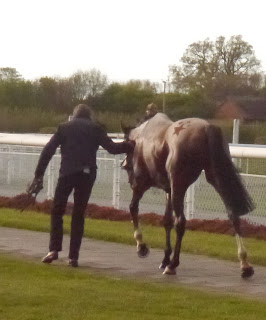 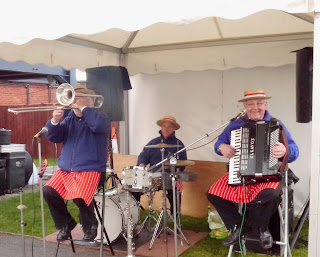 Posted by suefernandez at 3:27 PM No comments:

The May Fair comes to the city of Hereford for three days immediately after the May Day Bank holiday and disrupts the traffic from Tuesday to Thursday. Of course, anyone who knows how awful the traffic jams in Hereford are will be laughing out loud! After all, the ring round doesn't go round the city - it goes straight through the middle of it!

Everyone knows that when you are a child things seem bigger than they really are, but in the case of the Fair, when I was a child  - a mere 50 years ago - it really was a lot bigger. From the top of Aylestone Hill, the main road into town from Worcester, you could see the lights from all the rides and the candy floss and burger stalls and what seemed like the entire population of Hereford out enjoying themselves. First stop was Stonebow Road where there was a huge car park - here they always had a boxing ring  alongside all the other attractions, as well as a stage with dancing girls 'a la Tiller' . The Big Wheel and the Helter Skelter were always opposite the boxing ring at the railway station end of Commercial Road, with the Wall of Death, along with a ride whose name escapes me, but it entailed standing inside a big cylinder against the wall - the cylinder then began to spin and as it gained momentum, the ceiling went up and the floor went down and when it was going fast enough you were pinned against the wall - and we called this fun! The Fair snaked its way right through the town and every year there was some new ride to try - it hadn't been a good night unless you'd scared yourself witless and your insides had practically become your outsides. All ages were catered for -  for a few pennies little tots could try their hand at hooking a plastic duck  - the prize? usually a goldfish in a bag. Older lads loved to show off to their mates aiming an air rifle at a row of moving targets, or knocking a coconut off its perch - were they  glued on? it always seemed so!  You couldn't go home until you had bought a toffee apple or some candy floss or a burger, and a must-have item was a tosty  ball - a ball filled with sawdust which, if I remember rightly, was attached to a stick. Its purpose? Your guess is as good as mine! Personally, me and my two brothers used to see if we could hit each other with them until they exploded (bit like conkers only not quite so painful!)

Years ago there was such anticipation of the arrival in town of the May Fair - it was one of the highlights, like our annual trip to the seaside. Everyone went to the Fair, the streets were packed and the  atmosphere was great. Now it seems that young people are either a lot more sophisticated or there's better entertainment to be had elsewhere. Some of the traditional rides have endured - the Dodgems, the Waltzers, the Ghost Train and the Big Wheel, but this year when I had a wander round, occasionally it looked as if the Martians had landed - in a bid to give their customers bigger thrills there were rides like The Terminator and Freak Out! I don't think it will be long before the Fair disappears altogether, which is why I took a few photos for posterity. 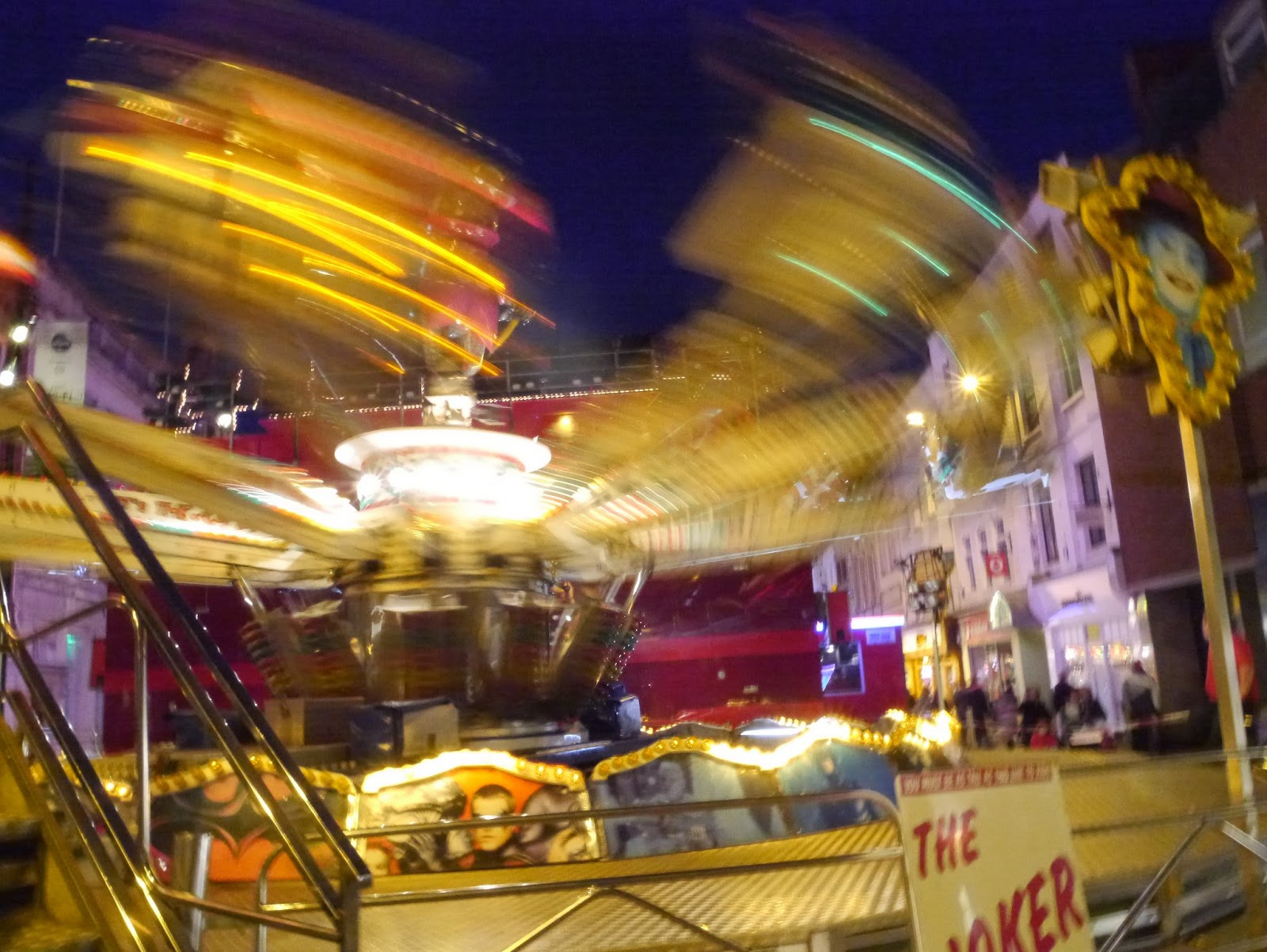 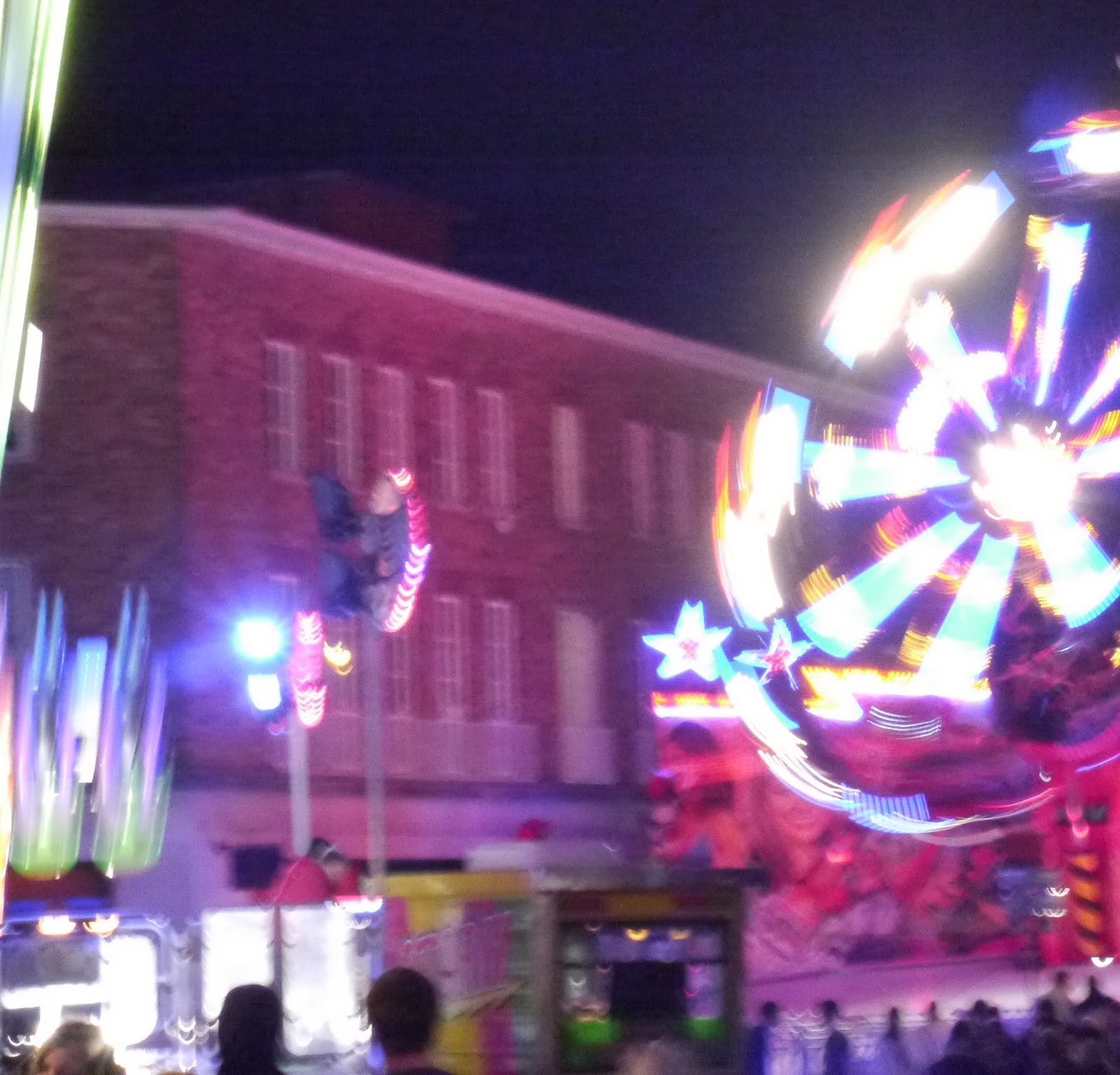 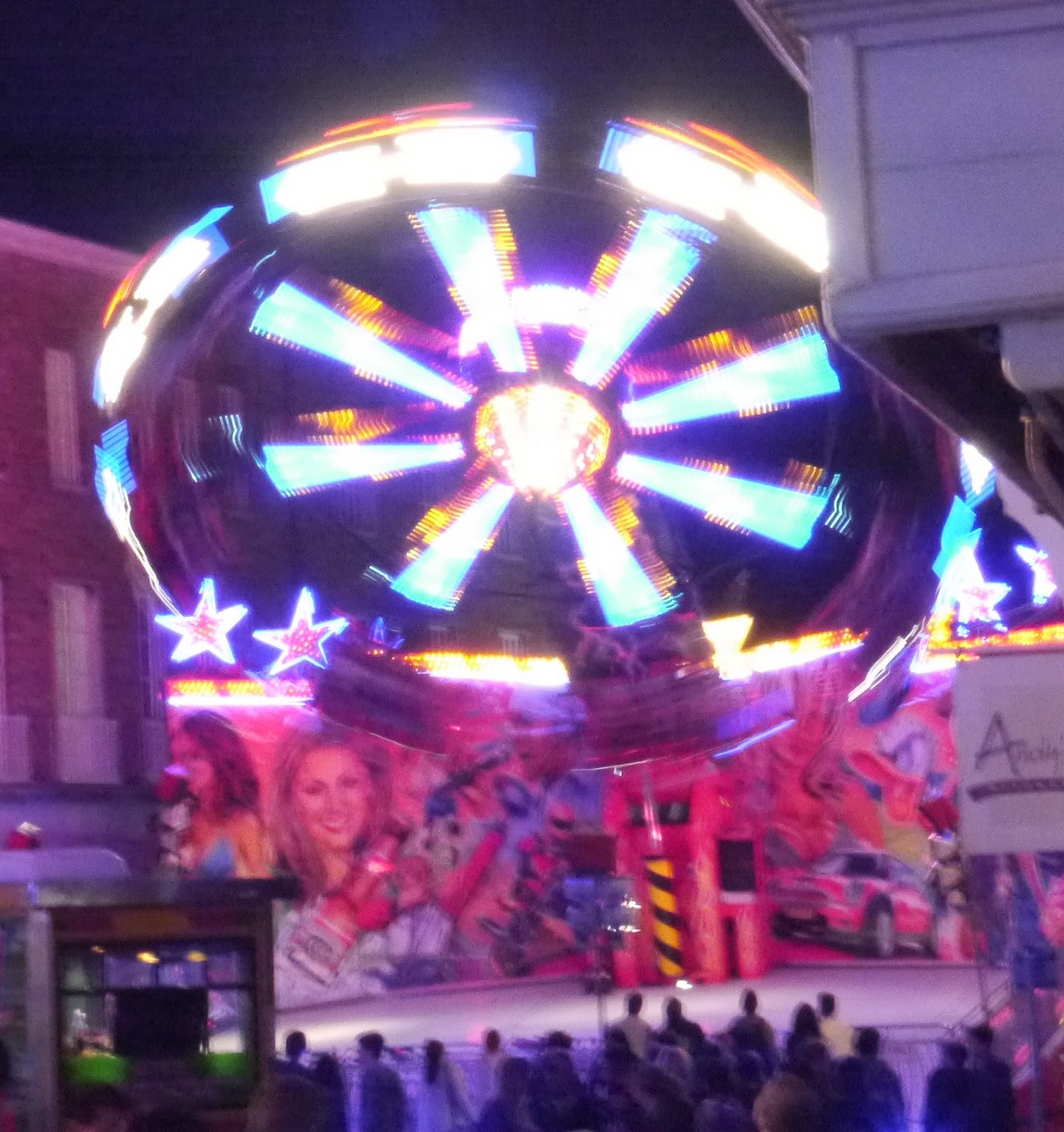 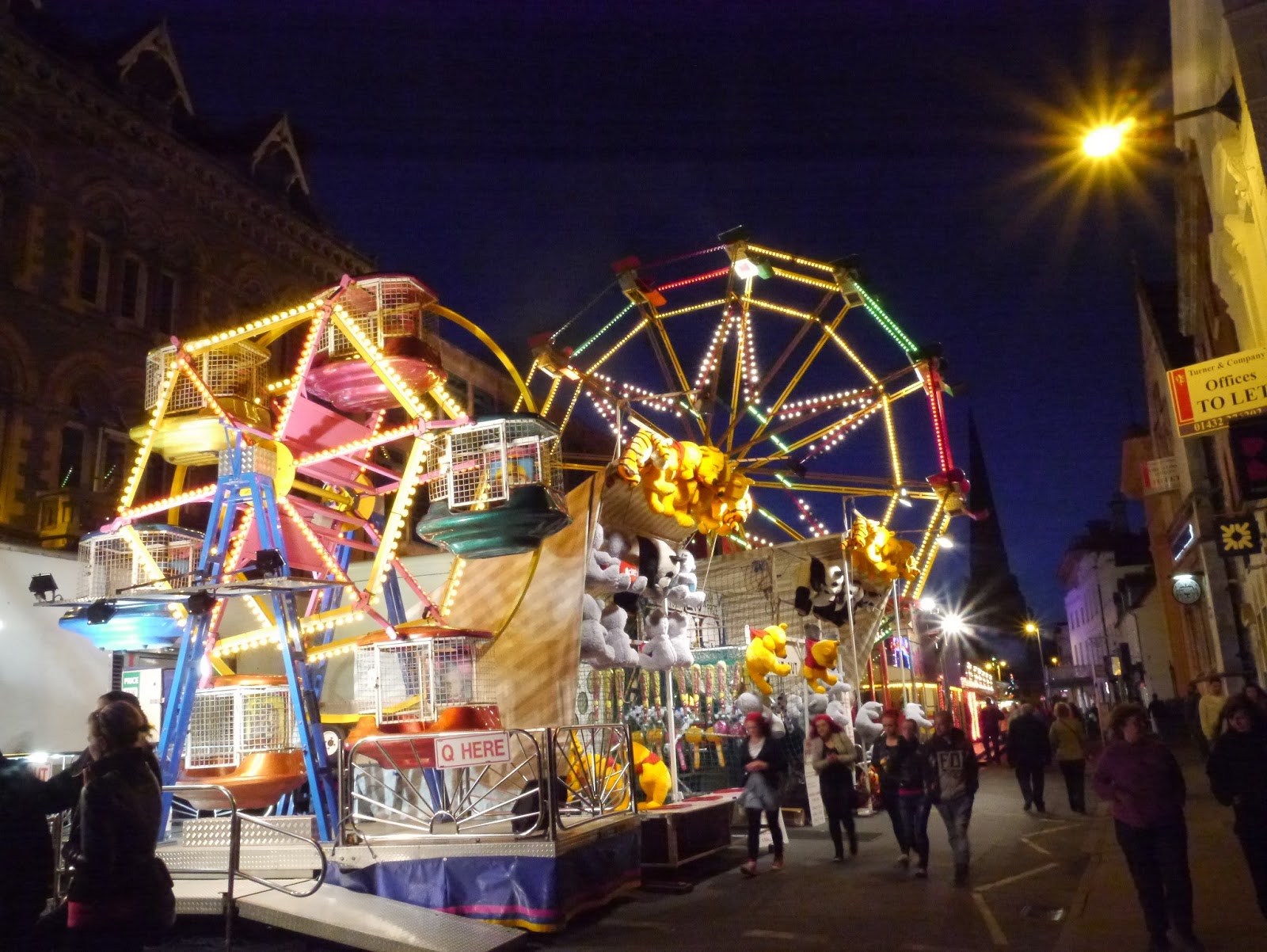 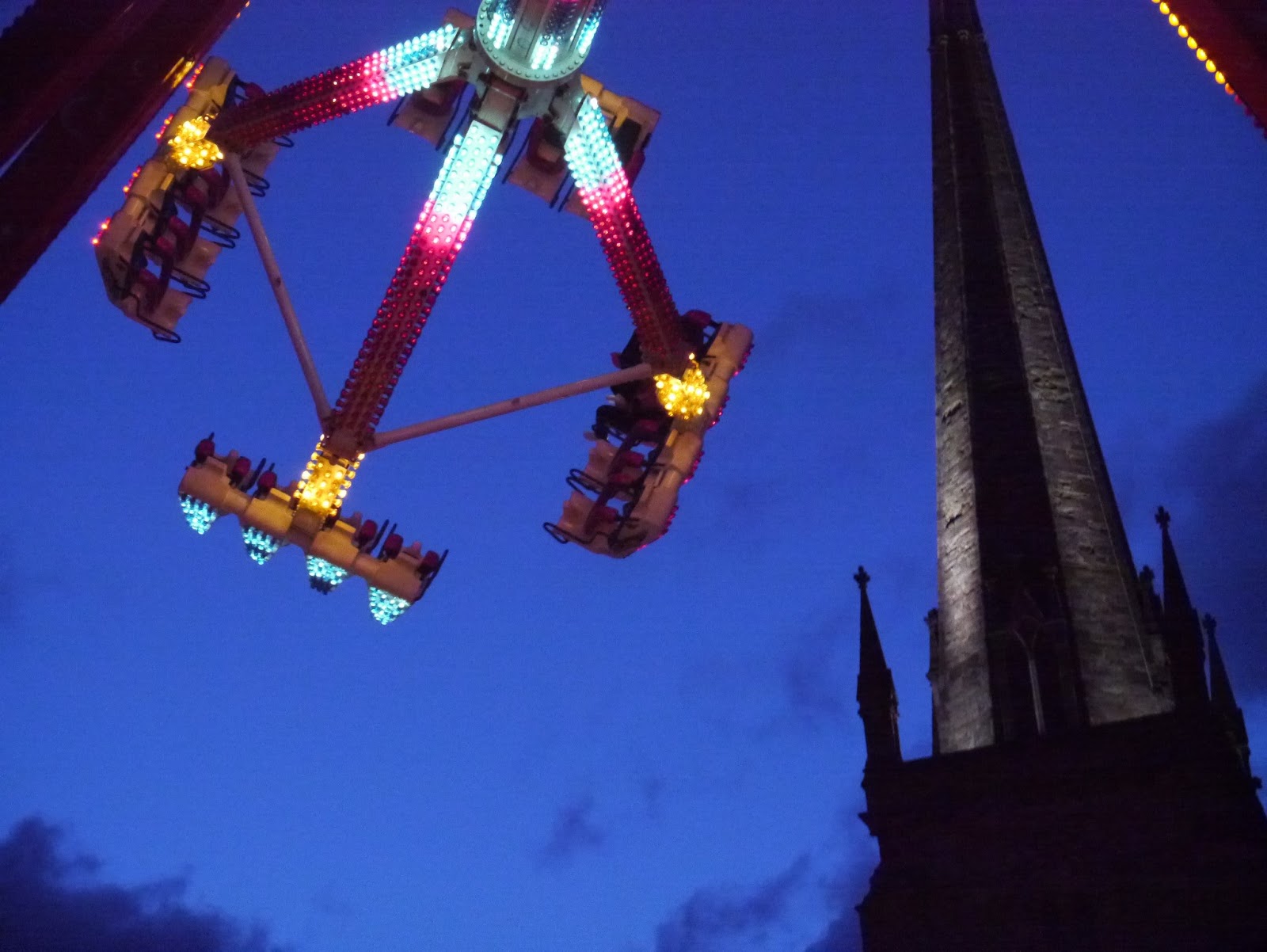 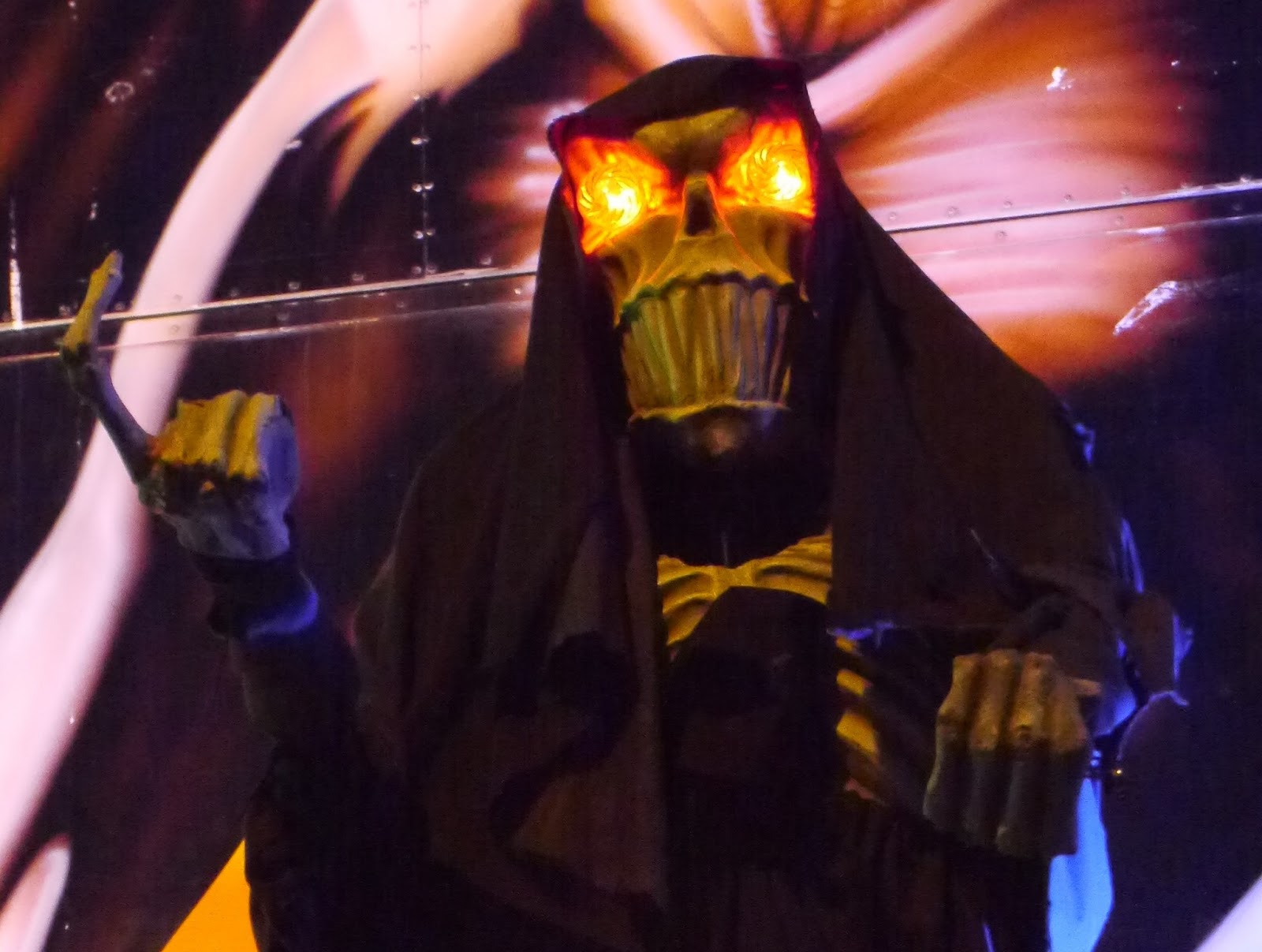 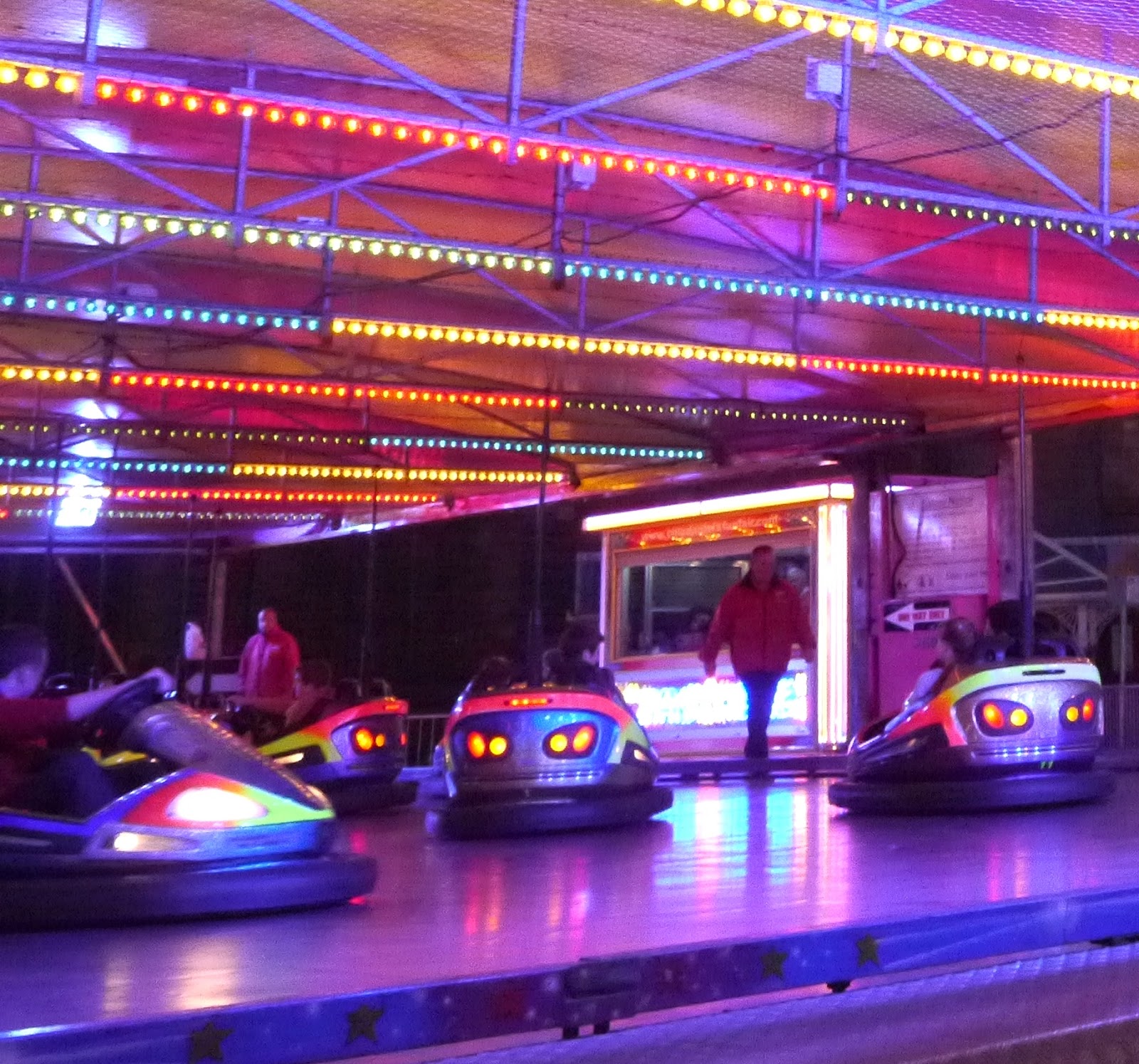 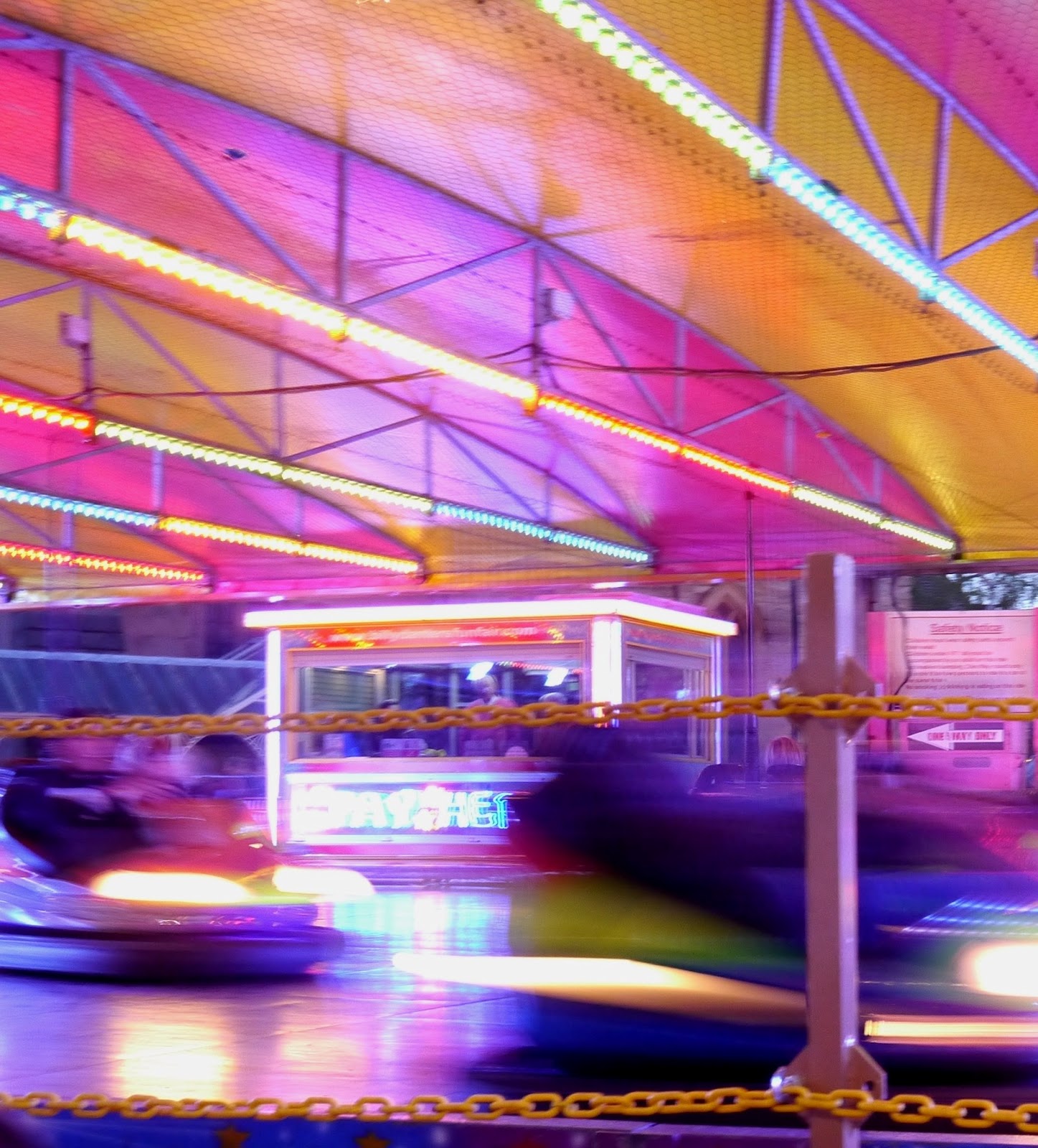 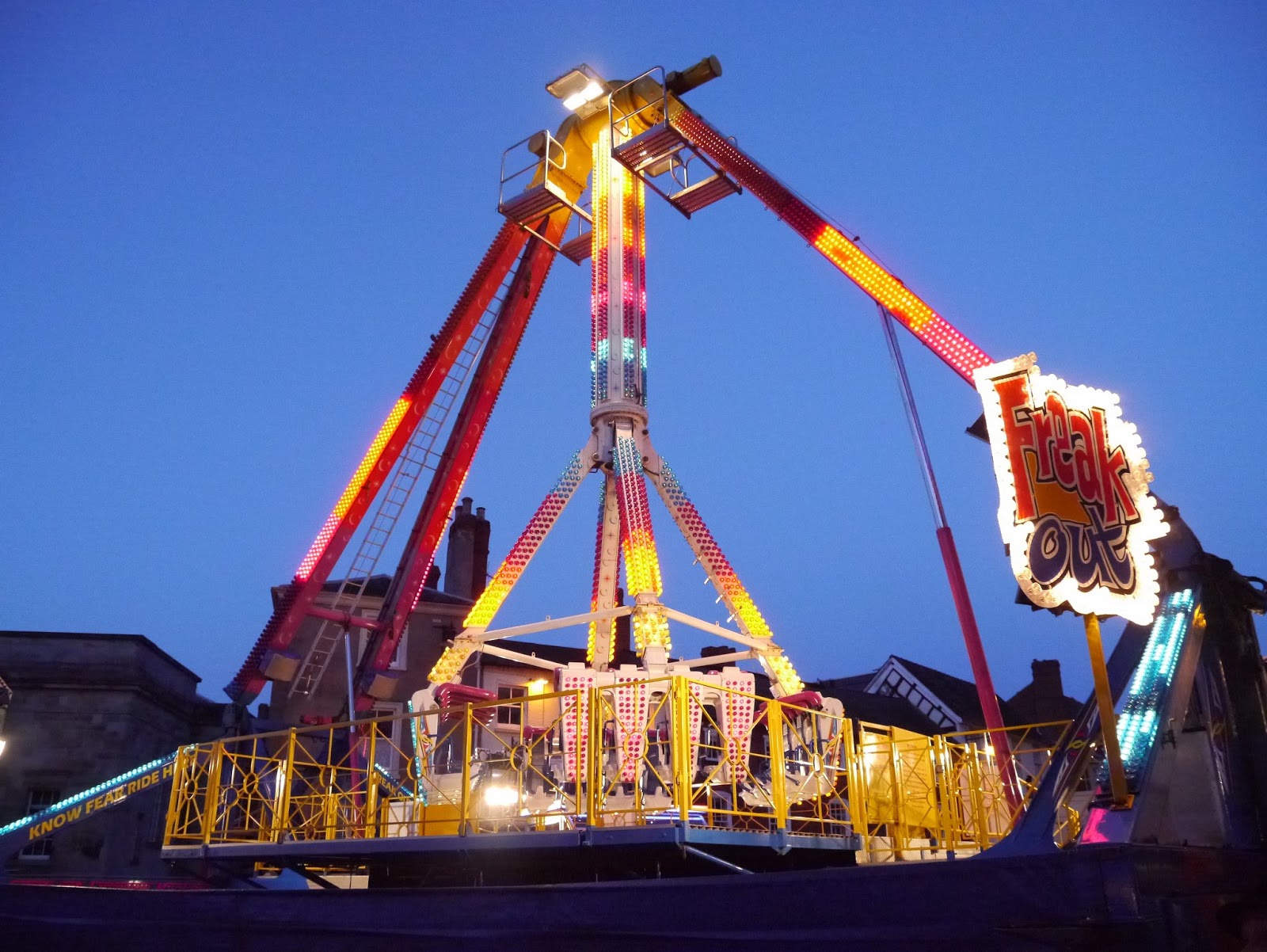 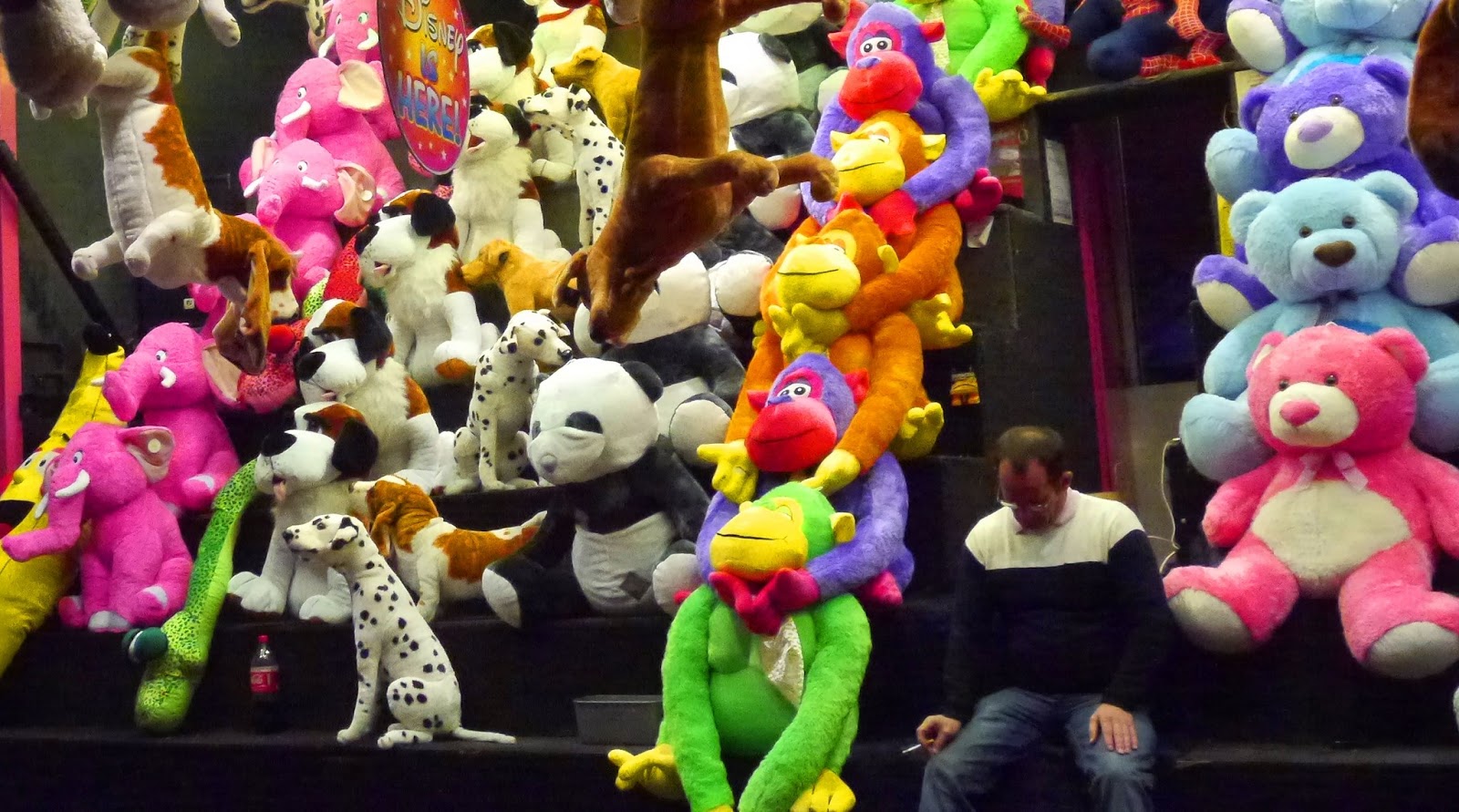